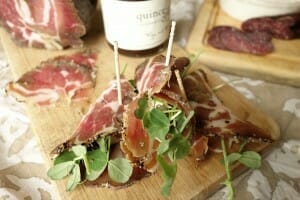 One bittersweet aspect of writing is that I don’t know who, if anyone, reads what I write. I send my stories out to the world, like a message in a bottle. Did it wash up on land? Did it sink to the bottom of the sea? Every once in a while I discover that my stories were enjoyed on a distant shore, which is one of the greatest rewards I can receive.mom’s family; his great aunts had worked at a dress factory across the street from my grandma’s house, and his father knows my aunts. His family was about to undertake their annual sausage-making extravaganza (there is no other word for making 450 pounds of sausage in one day) and invited me to join them. Sadly, I couldn’t make the trip. Instead, he offered to mail me some sausages when they were done.

Growing up, we didn’t have a lot of heritage-based food traditions. My dad has German, Irish and Choctaw ancestry, while my mother is Swedish and Tyrolean (the area where Italy and Austria collide). Most of the recipes we enjoyed that honored my family’s roots were Tyrolean—schmarrum (a pan-fried crepe dish drizzled with honey and cheese), griis (toasted farina with milk, raisins and walnuts) and jaunga (Tyrolean sausage), which my Aunt Flossy made every year.

Making jaunga (pronounced an awful lot like a green medicinal plant, but with a soft “G” sound), is a family affair. It takes all day, but a little wine and some friends can make it fun. Natural casings (hog middles) are washed and then soaked overnight. Pork and beef are fine ground, and spices such as whole black pepper, allspice, garlic water and salt, are added. Then the meat and spices are mixed with dago red wine. The meat is stuffed into the casings and then any air pockets in the casings are removed, a technique called  “spanking” as a small paddle with tiny pins in it, well, spanks the sausages. Each end of the sausage is tied off and then a string is attached so they can be handled without touching. The sausages hang in a dry place for one week before the meat is cold smoked with apple and cherry wood for four hours. Finally the sausage is rehung for another three to four weeks.

When I opened the box just last week and pulled out not only jaunga, but also pepperoni, sopressata and lonza, I felt overwhelmed. My Tyrolean grandfather, Sylvester Bones, died when I was three years old. I grew up in Ohio, and feel rather “American,” whatever that means. Pulling those sausages out of the box, however, was like finding a treasure chest that belonged to my ancestors. I found myself in a village in the alps of Tyrol where I joined a community of immigrants who made their way to the mountains and mines of Pennsylvania. I was then united with the children of the miners and farmers—my mother, aunts and uncles—before I landed safely in my childhood home in Ohio. There, I joined my cousins, parents and sister to enjoy jaunga during holiday season. Finally, I am surrounded by my husband and children, right here in Madison, Wisconsin, proudly serving food of my ancestors, the greatest gift that I could ever imagine.

Spread a little goat cheese and fig preserves on thin meat slices. Top with microgreens, roll and secure with toothpicks.

African & American Store Brings a Taste of Africa to Madison