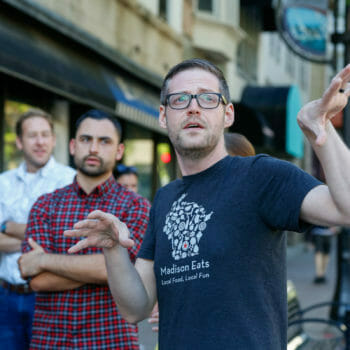 Warner started farming in the late ’80s, helping on his mother’s land near Dodgeville. But when she handed him a bottle of pesticide to spray on the broccoli, Warner realized he was on a different path. He learned how to grow food using more organic pesticides and built hoop houses, heavy-duty plastic greenhouses, to extend the growing season.

On his own farm near Belleville, Warner grew various crops, including greens, flowers, tomatoes and spinach. In 1993, he decided to move away from growing spinach, but the previous years’ plants had different plans. They had reseeded, resulting in a bumper crop of winter spinach. Too early in the year to sell at the farmers’ market, Warner sought an alternative outlet for his crop. Eric Rupert, now the head chef at Epic, was working at the time as co-chef with Odessa Piper at L’Etoile. He purchased the spinach and then wanted more. Rupert told Warner it was the best spinach he had ever had—the frost had sweetened the tender greens to perfection.

From that moment, spinach became one of Warner’s biggest crops, and he increased the production area from five hoop houses to fourteen. Currently, Snug Haven Farm supplies only two Madison-area restaurants—L’Etoile/Graze and Bradbury’s—with their spinach. The rest is sold to consumers through CSAs or at markets.

This year, production was down as a result of the very bitter, prolonged winter. But Warner expects to have the product available during the first few weeks of the Saturday Dane County Farmers’ Market. Stop by the Snug Haven booth and say hello to Warner and his frequent helpers, daughters Danielle and Hannah. His wife, Judy Hageman, is still recovering from a long battle with chronic Lyme disease and takes care of tasks at the farm, where their mission is to “grow food for the body, and flowers for the soul.”

Check out a video and recipe here…