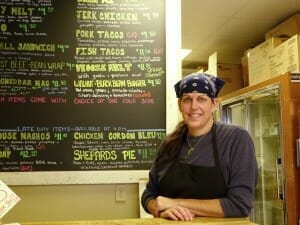 Farm-to-table fare is almost an expectation among diners these days, but farmer-to-table isn’t quite as common. After all, farmers have enough to do just growing and raising food; cooking great meals with their products and serving those meals at a restaurant isn’t something many farmers do.

At Jordandal Cookhouse, Carrie and Eric Johnson bring the fruits—or more accurately, the pasture-raised livestock—of their two sustainable farms (one in Argyle and one in Darlington) to the tables of their Verona kitchen and café.

Eric and Carrie started out growing produce and raising a few animals in the late ’90s when both of them had other off-farm jobs. Their passion for growing food and the demand for pasture-raised meats grew, allowing them to move full time into farming, at Jordandal Farms, where they eventually focused on raising hogs, lamb, cattle and poultry.

At market, they found that many of their loyal customers wanted more than just bulk meat. “They would ask, ‘Don’t you have anything already made?’” Carrie says. So she started making value-added products such as frozen soups, pasties and pizzas. She rented various commercial kitchens until finally settling in the current location in Verona in 2011. Again, taking a cue from customers, Carrie began to offer carry-out service at the commercial kitchen location, supplying many Verona locals as well as Epic employees with truly farm-fresh food, and expanding to offer lunch and dinner fare such as sandwiches, burgers and tacos.

This past November, Carrie and Eric added yet another exciting chapter to their growing business—a small room for sit-down service. The airy dining room sports an eclectic mix of tables, including a large family farm-style table. “Madison is full of restaurants that support the farm-to-table philosophy, but here in Verona, it’s much harder to find,” Carrie says. “Many people still don’t know we are here, but when they find us, they always come back.”

As if on cue, a family with a small baby seated at the large wooden table waves to Carrie. “My former employee,” Carrie says, excusing herself to greet them. I tag along and ask what they like about the restaurant. “The food is really good,” says one diner, and all heads bob in agreement. “We can each get something we want: we got the walnut and bean burger, the bánh mì, the fish tacos … And it’s local. I like knowing the source of the food.” Even the baby is happy, grabbing and shaking the crinkly butcher paper that encased the sandwiches.

Carrie’s main impetus for making delicious food from their products is to bring good, healthy food to the community. “I am on the road a lot and always want quick, good food,” she says. “That is what I make. Everything is made in small batches, from scratch. The fish is even sourced from a local Verona man who fishes the Bering Strait each year.”

Though owning a restaurant—and a farm—requires a lot of hard work, for Carrie, running the Cookhouse is rewarding. “Customers say, ‘You are the farmer? You raised these animals?’” Meeting customers who appreciate their hard work energizes her. And for the customers? Well, we can feel good, too, because it doesn’t get more local than farmer-to-table.

Jordandal Cookhouse is currently open Tuesdays through Fridays, 11 a.m. to 8 p.m. and Saturday, 10 a.m. to 3 p.m., for dine-in or carry-out. Look for expanded Saturday hours to begin on February 7, when the Cookhouse will open at 7:30 a.m. and feature a full breakfast menu and new breakfast entrees. The restaurant is located at 600 W. Verona Rd. in Verona. For more information, call 848-3298 or visit jordandalfarms.com.