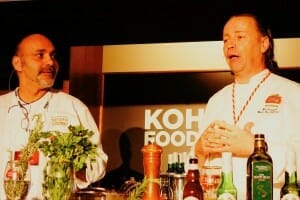 Marc Stroobandt, master beer sommelier from Stella Artois, and chef Michael Feker from Il Mito in Milwaukee, quickly won over a large crowd during their beer and food pairing demo at the Kohler Food and Wine Experience this past October. They made a great pair themselves. Stroobandt, his hair slicked back from his face, took the stage and immediately poured a Hoegaarden. “ You Americans always tilt the glass. You don’t like too much foam,” he began with a smile. “But the foam carries the flavor. This is how you pour a beer.” He held the glass straight up and down, building a nice head of foam before tilting the glass. “Belgians are food-driven people; the beers were made to complement food. We don’t just drink to get drunk.” He hesitated, “Well sometimes we do.”

Meanwhile Chef Feker heated a skillet to sear juicy lamb chops. After the meat sizzled and browned, he stuck it into a hot oven to broil. “Never set it on the top rack. You’ll burn it!” he advised. Just before the chop was ready to be served, he deglazed the pan with Stella Artois. “Add the beer at the end,” he explained, “It’s not like wine; as the water evaporates, the beer’s bitter qualities are accentuated.”

The large crowd tasted, sipped, sampled and watched as the chef and sommelier explored different Stella Artois beers, paired with various foods, including roasted root vegetables and seafood. They starting with the Hoegaarden, moving to the Stella Artois, the Leffe Blonde and Leffe Brune before tasting the Cidre, Stella’s newest product.

You don’t have to wait until the next food and wine show to try a beer-infused meal. Chef Kevin Rikli from Next Door Brewing on Madison’s east side has mastered the art of pairing beer and food, and even goes as far as to use the by-product of brewing in the dishes he creates. On a recent lunch date, my son devoured a pile of poutine—perfectly fried potatoes, covered in fried Sassy Cow cheese curds and topped with hearty gravy—while I did my research. The spinach salad with goat cheese, slivers of red onion and bacon featured a slightly sweet vinaigrette dressing made with—you got it—Next Door’s Wilbur oat cream ale! Topping the baby greens was a lacy, crisp wafer that imparted a sweet note, perfectly complementing the delicacy of the dressing. Chef Rikli explained that he simply baked the grains processed during brewing, resulting in this delicious crisp. Its sweet flavor came from the natural caramelization of the sugars in the grain. Simply delicious. Daily dessert specials often feature Next Door’s stock ale.

I had a chance to interview chefs Rikli and Feker and sommelier Stroobandt, gaining more insight into the philosophy of beer and food pairing. Though I spoke with them on separate occasions, I have combined their answers below.

What is the basic philosophy about pairing beer and food? What would you tell someone who has no experience?

MS: Beer glorifies food. It’s like a bridesmaid. It shouldn’t outshine the food, but make it more beautiful.

MF: Many Belgian beers are made with spices. For instance, Hoegaarden has coriander and orange flavors. This brings out the acidity of foods, and pairs perfectly with Middle Eastern food, for example.

When do you add the beer to a dish?

MF: Add near the end of cooking so it doesn’t evaporate too much and leave a bitter flavor.

What about very bitter beers, how could you use those in food?

KR: We don’t use the really hoppy IPAs; the bitter flavor overwhelms the food.

Why do you prefer cooking with beer over wine?

MF: Beer has an effervescent quality, it’s a palate cleanser, and can add a subtle flavor to food.

KR: I’m more of a beer guy. I’ve always enjoyed drinking beer, so why not cook with it? I prefer to try the same dishes one would make with wine and use beer instead.

Does size matter? I mean, of the glass.

MS: Yes! Just like with wine, the flavor of the beer opens, and the layers of flavor develop differently depending on the size and shape of the glass.

What beer do you prefer with desserts or sweets?

MS: The Cidre goes with everything! Eat with it, cook with it and drink it. It would be great with a poached pears and ginger, and the Leffe Brune is nice with chocolates. Malty beers pair perfectly with sweets.

KR: Next Door’s Sevex stock ale is versatile since it has a malty quality. We use it in our homemade frozen custard that we serve with a pear and almond tart, and our pies. The cream carries the beer flavor very well, but also tempers the bitter edge. In general, stouts and creamier beers marry well with desserts.

Want to cook like the pros? Try this recipe for Chef Feker’s Pan Roasted Lamb with Beer Reduction. Use Stella Artois or Next Door’s Sevex stock ale. You’ll be in Seventh heaven.

In a large pan over high heat add half the butter and olive oil, sear the lamb chops 1 minute per

side and or until lightly browned on all sides. Remove chops and set aside. Meanwhile preheat

In the same pan, add the remaining olive oil and sauté the onion, eggplant, carrot, rutabaga,

celeriac, and potato for 3 minutes.

Lower the heat to medium and add the chopped garlic and chili flakes. Cook until the garlic is fragrant.

Deglaze the pan with wine and then reduce the wine by half.

Add the Au Jus, the basil, rosemary, oregano, and parsley and simmer to the correct consistency. Then add the beer and the remaining butter and keep warm.

Categorized under
Tagged with