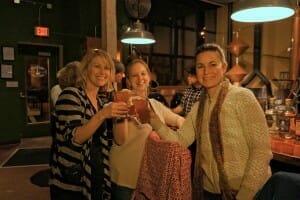 We started at the Madison Enterprise Center, run by Commonwealth Development (CWD), at 100 S. Baldwin where the two tour groups, about 13 people each, explored the production facilities of Quince & Apple, Lala’s Nuts and Potter’s Crackers. Appetizers in the CWD gallery whetted our appetite–cheeses donated from Hy-Vee, Fromagination, the Willy Street Co-op and Holland’s Family farm were layered on trays next to bowls of Potter’s crackers, bags of Lala’s nuts, bowls of Quince & Apple preserves and syrups, fruit, Yum Butter, and chocolate.  Of course we didn’t forget the beer–Wisconsin Brewing Company representative Vanessa LeBert poured ample beer samples.

After meeting the producers of Quince & Apple (where we met the newest little addition to their family!), Lala’s nuts and Potter’s Crackers, we walked to RP’s Pasta. One of the most rewarding aspects of the tour, aside from the amazing samples, is witnessing the passion that each producer has for their own product. Peter Robertson walked us through his new gluten-free production area where a rocket shaped cryogenic freezer will instantly freeze their expanding line of gluten free pasta. They will be the first business to offer pre-cooked, frozen gluten-free pasta to restaurants! Our lucky group was literally the first group of people to ever sample his new gluten free pasta shells. And they were delicious!

A short walk later, we arrived at Main Street Industries, also managed by Commonwealth Development. Johnny Hunter, one of the founders of Underground Food Collective, took us through their processing facility. It was immediately clear who the hunters in the group were; as he opened the large sausage and meat curing storerooms, people either walked right in talking meat lingo, or backed up as far as they could. I only got a bit grossed out when I stepped on something squishy and realized it was a meat scrap:). It always feels good to know where your food comes from, unless it’s on the sole of your boot.

To top off the night we headed into Old Sugar Distillery where my friends, the Melon Heads, were tearing it up on banjo, guitar, bass and vocals. The wall of barrels was the perfect backdrop to their harmonies. Nathan from OSD mixed up an amazing cocktail using their whiskey, Lemon Honey syrup from Q & A and bitters. Oh. So. Good. Samples provided by NessAlla Kombucha, Cupcakes-A-Go-Go Cafe, Landmark Creamery, Wisco Pop and Calliope Ice Cream, and appetizers from The Wise and Underground Catering added to the festive feeling.  Donations from many local businesses helped raise about $300 for two charities, Eat For Equity and the Fritz Food Pantry at the Goodman Center.

But at the end of the night what warmed my heart more than the whiskey (true!) was the realization that we have such an amazing community of artisan food producers, people who truly care about their community and the planet. And we have a wonderful community of eaters:), people who want to support our wonderful local products. Together we are stronger.

Stay tuned for the next tour–sometime in late November or December 2014. Peace.