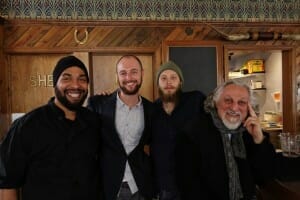 Tip Top Tavern’s mystique and bad reputation precede its recent renovation and highly anticipated opening by Ben Altschul.  Altschul says that the purchase of the tavern, located on the corner of North Street and Commercial Avenue, was fortuitous. He recalls driving past the corner bar with his mother Jane Capito, owner of two popular dining spots, Lazy Jane’s and Mickey’s Tavern, on the way to Warner Park for pee wee baseball when he was a kid, and the sense of history, and mystery, that it exuded.

More recently, Altschul had been living in the neighborhood and frequently walked past the building. Like many people in the neighborhood, he hadn’t gone in—it was one of those places that catered to a very regular, and seemingly rough, crowd. He had been looking to open a bar and eatery, however, and wondered if they would want to sell it. After leaving a few phone messages stating his interest in purchasing the bar and not hearing back, Altschul finally went into the Tip Top to talk to the owner. “I walked in and introduced myself,” Altschul says. “I told the bartender, ‘I’m here to see the owner.’ I got a few looks from the patrons, but then the bartender, who happened to be the owner, picked up the phone, called his wife and told her, ‘someone’s here to buy the bar’. Unbeknownst to me, it had been listed for sale twelve hours prior.” Before it even went on the market publicly, Altschul was the new owner.
A FRESH START

That was December of 2012. Just a few weeks ago, the doors of the Tip Top Tavern opened to the public under the new ownership of Altschul and his business partner Alfred Rasho, and in the capable hands of chef Durrell Williams and bartender Josh Swentzel. Those doors let in a blast of fresh air. “The dark side of the bar was easy to see,” says Altschul. “But I also saw the bright side. There was something wonderful about the bar.” The walls were sanded and refinished, revealing a warm, burnished oak under the “sticky, sappy black.” The ornately tiled ceiling is painted a buttercream yellow, underscored by brightly patterned trim. Cobalt blue countertops lend to the cozy and welcoming atmosphere.

Though most physical signs of the bar’s past have been revamped, Altschul has managed to incorporate relics of Tip Top’s history into the decor. Old photos of the nearby Oscar Mayer factory and perhaps former bar patrons hang on the wall, and an impressive set of bullhorns that Altschul found in the basement make a statement over the kitchen door.

Altschul’s aim is to make the Tip Top a safe, vibrant and respectful neighborhood bar. And from what I have seen, he’s already done that. I stopped in one recent afternoon; Josh was pouring drinks, his easy composure surfacing from behind his long beard, piercings and tattoos. Bouquets of fresh flowers sit on the window ledge and customers throw small talk and laughter around as easily as their drink money. Altschul personally greets everyone who walks in the door.

Bartender Swentzel mixed a North and Commercial for me (at my request to photograph something pretty)—a mix of gin, brandy, seasonal syrup fruit juice and bitters. The selection of craft beers and cocktails complement the new menu, to be rolled out this week. (In other words, you’ll want some fries and a burger to soak up Swentzel’s strong cocktails!) Chef Durrell, who previously worked at Mickey’s, describes the food as “upscale, comfort, bar food.” A  full menu is now offered, including burgers and fries, as well as items that pay homage to the neighborhood—Union Chili; the Little Oscar, a sandwich that layers bologna, potato chips, mayonnaise and yellow mustard on white bread; and Green Chili Mac n Cheese (for the Packers fans, of course), spiced with puréed roasted poblanos and jalapenos. The Friday fish fry already packs the house.  Altschul plans to start serving brunch soon.

The new menu and refurbished interior didn’t stop on long-time Tip Top customer from stopping in. Harold sat at the bar, sporting a worn leather jacket and black watch cap, stubble covering his jawline. He said that it was his first time in since it reopened. “There was a lot of riff-raff here. I’m one of the riff-raff,” he laughed. “Most of those people will find somewhere else to go drink, but I like this. This is still the Tip Top Tavern to me. My girlfriend and I met here six years ago.” He lowers his voice, “She would have loved this place…she died two weeks ago.” Josh steps up to offer Harold a drink refill.

For Altschul, it remains the Tip Top Tavern as well. He says, “People ask me why I kept the old name and the signage. I knew there was something good at the roots of this place. This is an opportunity for redemption, to get back to those roots. At the heart of this bar is its conflicted history, you can’t deny that. But that is part of what makes this place what it is now. That’s what makes it a great place.”