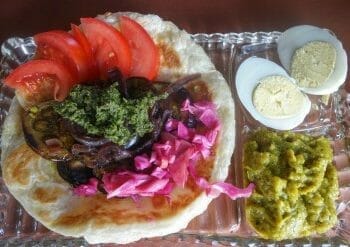 Laila Borokhim of Layla’s Persian Food says she’s not a chef, she’s a cook. “Food should be accessible and meaningful, not fancy. I just cook what I like. I cook what I learned to make from my grandma.” Her down-home approach is apparent—you’ll often find her simultaneously cooking and serving her food, all while joking with customers, often about herself.

But under her casual, self-deprecating exterior is a hard working, talented chef (I said it!) doing what many couldn’t—serving unfamiliar food in off-the-beaten-path locations.

And now she brings more delicious ethnic food to Madison with the opening of Noosh, her second restaurant, on South Park Street.

Borokhim serves Sephardic Jewish cuisine at Noosh. The menu includes inspired dishes such as B’Steeya, which is shredded phyllo dough layered with chicken, honey and almonds, and Shakshuka, a savory mixture of stewed tomatoes and vegetables peppered with fragrant herbs and spices and served with poached eggs and challah bread.

Her food is lovingly created from scratch. She offers sandwiches, salads, and more, deliciously crafted from local ingredients. Whether you’re familiar with these authentic Jewish dishes or not, the options are sure to spark some interest, including saffron matzo balls poached in bone broth; sabik, a sandwich made with grilled eggplant, mango chutney, pickled cabbage, onions, fried egg; and lamb brisket, a smoked slow cooked lamb served with root veggies over rice. Her menu changes with the season, so check Noosh’s Facebook page for current offerings and hours.

She cites the location’s former digs (the South Park Street place used to be a Taco Bell) as a challenge, but she says she loves the neighborhood. Borokhim transformed the former fast food joint from the inside out.

“When I go out to eat, this is where I go—Park Street. I like this area, and my favorite restaurants are here. I hope this works,” she says.

And so far it has worked. Feedback from the community has been positive, and Borokhim already has served a steady stream of customers. Check out this new ethnic eatery for yourself at the grand opening this Friday.