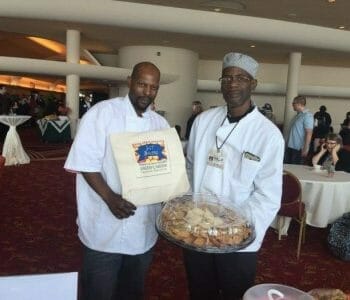 “If I hadn’t gone through [the Just Bakery] program, I’d be in prison,” says John with certainty. “I’d have gotten drunk, done something dumb.” John is 48, slender and weathered. He has been in prison 20 months over the past 3 years. Staying out of prison is a challenge. “It’s hard. I’m in a shelter.”

Today he sits in a small office at the FEED Kitchens on Madison’s north side where he is meeting with Carmella Glenn, coordinator of the Just Bakery program, for an interview. She explains, “He applied for a job at the UW in food service, and the phone interview went well. I want to give him some hours while he’s waiting to hear back.” Doubt clouds John’s face, “But they’ll see my record.” Glenn reassures him that he’ll be fine, he doesn’t have any violent offenses. John joined the Just Bakery program upon recommendation from a bunkmate in jail and quickly became a top student.

A Seed of Hope

Just Bakery was started in 2013, an initiative of the Madison-area Urban Ministry. The program offers 16 weeks of intensive training in baking and culinary arts to recently incarcerated men and women. Training is unpaid, but upon completing the program, students earn a SafeServ certification, plus special certification from the WI Baker’s Association, and a living wage. “Our biggest challenge is keeping the students in the program for that long. They are eager to work and earn money,” says Glenn.

Glenn is perfectly suited to her job. She brings a background in both criminal justice and a degree in culinary arts from Madison College, as well as personal struggles that many students can relate to. Glenn has been sober for 13 years. She understands how damaging alcohol, mental health and drug related issues are to this particular community. Glenn is approachable and caring, offering support and advocating for people who often have had no one else believe in them.

Sarah, just 24 years old, arrives at the FEED Kitchens shortly after John. She is young and shy, but has what many of the students don’t have – her family’s support. Still, the challenges are hard. Sarah has been in the program for just over a month, one third of the way to completing it. She was in prison for almost 5 months. “If I don’t get a bracelet for home stay, I will go back to prison for 9 months,” she says. Her future is uncertain, but she shows up for the program anyway. “I have always loved baking.” she says. “I used to tell my mom I was going to make a snack. I’d head into the kitchen and bake. Baking is therapeutic.” Sarah’s grandma told her about the program and she signed up. “I can use all the help I can get,” she says.

Teachers are Students, Too

Jim McLaughlin, a former baker at La Brioche, is the program’s instructor. Today he will teach Sarah about measuring the mass and volume of ingredients. Glenn says that this program totally changed him. He agrees, “I am a white middle class male. I have no experience in this realm. This population faces so many barriers. So many people in the program have no family. And every day they have to put their dignity on the line.” McLaughlin says one of the biggest challenges the students face is that the agencies have no concept of what works in the real world. The agency may require that a person have a home visit with no notice. “That is okay for us, but in the real world, an employer will not accept that. If they can’t hold a job because of the demand on their time, they are likely to be re-incarcerated. The students have to continually be more committed to having a better life, than to go off the path.”

Just Bakery’s commitment to offering a better life to so many disadvantaged men and women is unwavering. In fact, it is growing. The program has invested about $200,000 to build a commercial kitchen in a new facility that is being built by Porchlight on Madison’s east side. They expect to relocate the Just Bakery program in February of 2017.  “We’ll be able to expand and offer more classes for our students, and fill more orders for our products,” says Glenn. Now that’s a solid foundation for a bright future.