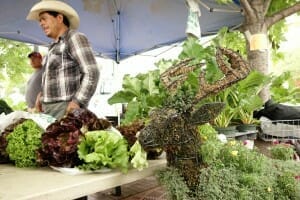 For many farmers, working the land keeps them close to their family, even if that family lives thousands of miles away. Jaime Ortega moved to Wisconsin from Tayahua, Zacatecas Mexico in 1994. At the time, his older brother was already farming near Oregon, WI and helped him get a job on the same farm, where he could earn a little piel de la rana (frogskin, a slang term for money).

Jaime had never left his small town but was no stranger to farming. He grew up poor, and started helping his dad farm from a young age, raising food mainly to feed their family. Within a few years of working in WI, his life changed dramatically. Not only was he able to build a house for his parents in Mexico, but he met his wife, Natalie, whose family owned the farm where Jaime worked. “It’s different here.” Jaime says. “People there farm by hand. We use horses and mules to plow and plant. Here you have every machine you can think of.” There are other differences, too; he and Natalie grow snap peas and flowers, which he never grew in Mexico. Oh, and there’s winter. “I hate winter. It is so depressing. I love the rest of the seasons, but winter, I don’t like it.” bemoans Jaime.

Aside from mountains of snow, and tractors, many things remain the same. He and Natalie now own their own farm (Natalie’s Garden and Greenhouse) and grow many vegetables he grew as a kid–carrots, zucchini, tomatillos, peppers and sweet corn.  And they have a family here. A few of Jaime’s 12 brothers and sisters live in the area and help out on the farm. Natalie and Jaime have a young daughter.