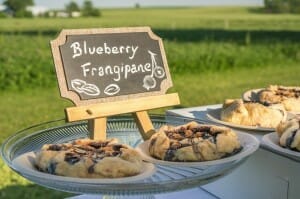 On Sunday, June 8, I woke up to rain, gray skies and dark clouds. It didn’t last long; during the mid-morning drive west on 151 to Fall River, Wisconsin, the clouds gave way to sun, reflecting the excitement I felt knowing that the afternoon would be spent at Fountain Prairie Farm enjoying the Farm to Feast dinner, co-produced by Madison Magazine and Madison Eats. I turned on some tunes and let the sleek spring air whip through my car windows, caressing my winter-shocked skin.

Farm dinners have become a popular way to enjoy local foods and support local farmers and producers. Often they are elegant affairs, a juxtaposition between fine dining and rugged farm life. The Farm to Feast dinner was no exception. Looking across the landscape, one could see the beautiful Scottish Highland cattle grazing on hills in the distance, though a few stuck close by, taking mud baths. A large windmill towered above the barn, rotating deceptively slowly—it produces enough energy to power two farms! Set up in the shade of stately trees near the historic Victorian farmhouse was a open-air bar serving Wollersheim Winery wine and an appetizer table. As people arrived they milled about, listening to music from the No Name String Band, talking, drinking and nibbling a range of antipasti put together by Chef Patrick O’Halloran of Lombardino’s and his crew—Fountain Prairie beef tartare, marinated market vegetables, artisan meats and crostini using Batch Bakehouse bread.

After a tractor tour of the farm with owners John and Dorothy Priske, the over 120 guests gathered under the table to enjoy the exceptional meal. Friends old and new ate family style, passing a plate at what felt like a large family reunion. The menu centered around grilled Fountain Prairie ribeye steak and smashed fingerlings, flanked by other local offerings such as a savory panzanella with Canopy Garden  tomatoes and Batch Bakehouse http://batchbakehouse.com/ croutons, and grilled Black Earth Valley Farm asparagus. Looking one way you witnessed the chef and his crew cooking and plating the dinner, while in the other direction was the source of our main course itself.

all photos by Paddy Cassidy