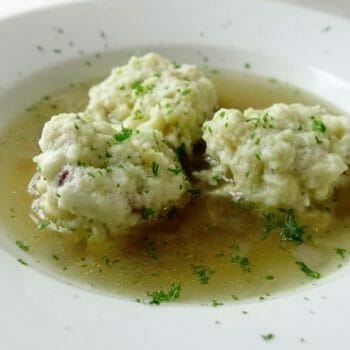 Greetings bakery fans! As some of you know Susan has generously hosted Madison Eats’ walking and B-cycle food tours over the past few years. Batch has been an amazing partner, offering behind the scenes tours of the bakery, a chance to learn about the artisan baking process and of course abundant and delicious samples! I am excited to continue to expand our partnership in a new way–blogging. I will be offering some recipe suggestions for Batch’s amazing products, which I am certain you already enjoy.

One of my favorite breads at Batch Bakehouse is the Scali, which I used for this grilled cheese sandwich, called The Bearded Pig.

Recently, I got another loaf, and after slathering butter on a few fresh pieces and dunking them in soup, I sliced it and tucked it away in the freezer.  Which meant that when I recently came down with a cold, and craved soup, I was set. But this time, instead of simply dunking the bread in my soup, I made canederli, a brothy and nourishing Tyrolean dumpling soup that my mom never made for me when I was sick, but apparently her mom made for her. Canederli is traditionally made with speck. Speck is a kind of cured meat that I couldn’t find locally, so I used Underground Meat’s guanciali instead (which I came to find really isn’t the best substitute. I would use a prosciutto next time. It was still tasty).  The clear, flavorful broth beautifully balanced the savory bread dumplings, and filled my body and soul with healing energy. Take that, winter!

The broth can be made well ahead and frozen. The dumplings are best eaten the day they are made.

1 cup grated Grana Padano, or Parmigiano-Reggiano, plus more for topping

2 eggs, beaten with a pinch of salt

Pour the olive oil into a smaller skillet, and set it over medium heat. Stir in the onion, and cook until it starts sizzling. Spoon a tablespoon or two of water into the pan (so the onions soften without coloring), and cook for 3 or 4 minutes more. Scatter in the chopped speck and cook for 1 to 2, until it has rendered its fat. Scrape the onion and speck into a large bowl and let cool.

Put the bread cubes in another bowl, and pour in the milk. Toss the cubes so they’re all drenched, then let them soak up the milk for about 10-15 minutes, until completely saturated. Squeeze the bread, discarding the excess milk.

Loosen the compressed bread, tearing it into shreds, and toss it into the bowl with the speck. Add the grated cheese, nutmeg, parsley, and salt, and toss everything together. Pour the beaten eggs over the bread mixture, and stir to blend. Finally, sprinkle on 1/2 cup flour and stir it in to form a moist, sticky dough. Pick up a bit and form it into a ball: if it is too soft to keep a shape, stir in more flour, a tablespoon at a time.

Fill a wide pot with about 6 quarts water, and add 1 tablespoon salt; heat it to a boil. With the poaching water at a steady boil, make loose balls of the dumplings about the size of a ping-pong ball and drop in the water, one at a time but quickly. Handle them gently and don’t stir them. Bring the water back to a boil, then adjust it so it simmers steadily. Don’t let it boil vigorously, which can break apart the canederli. Let the dumplings cook, without stirring, until all have risen to the surface of the water, about 10 minutes. Scoop one out and cut into it to check that the center is not wet and the dough looks uniformly cooked through.

At this point you can place them in a bowl and ladle about 1 cup of veggie broth over the dumplings. Top with chopped parsley and more cheese if desired and serve. Do not boil the dumplings in the stock/broth or the stock will be full of lots of pieces of dumpling. Not pretty.

You can also serve the dumplings without broth. In that case, have a big skillet with melted butter warming over very low heat. Lift the cooked dumplings with a slotted spoon, let drain over the pot for a few seconds, then gently drop them in the butter. Spoon butter over the canederli and serve them right away on individual plates or a platter with grated cheese.

To make the broth heat water over medium heat and add the vegetables. Simmer gently, mostly covered for about 40 minutes to 1 hour. Strain vegetables and set aside liquid.

In a stock pot heat olive oil. Add onions and saute about 5 minutes over med-low heat. Add garlic and stir in garlic for about 30 seconds. Add white wine and turn heat up to med. Cook for about 2 minutes then add strained stock back in, and water. Bring to a gentle simmer for about 20 minutes. Add salt to taste. Keep warm to serve over dumplings.