“How did people learn about you when you first opened your food cart on library mall?” I ask Markos Regassa, owner of Buraka Restaurant. “It was the aroma,” he says. 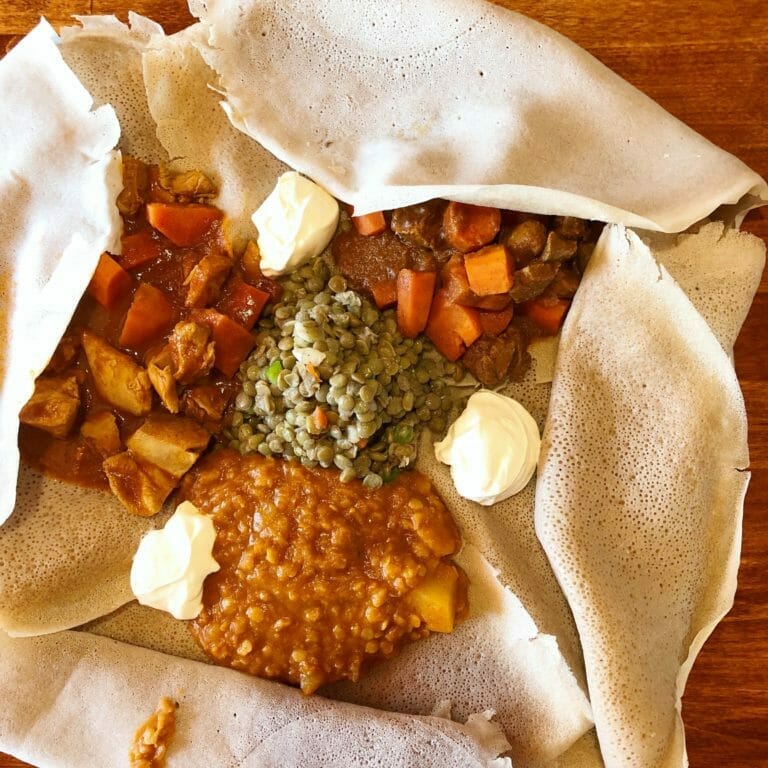 As I sat in his restaurant now located at 1210 Williamson Street, a plate of tibs firfir under my nose, his answer seemed obvious.

Regassa first served his food from a cart on Library Mall over 20 years ago. Regassa immigrated to the United States from Ethiopia in the 80’s, and graduated from the UW Business School in 1991. “It was hard to find a job. I was planning to work for a big company, save some money and start my own business. I got too many rejection letters,” he laughs.  “I ended up with a job with the State of Wisconsin. But I didn’t feel passion for that job. One day I was walking through Library Mall, and noticed the food carts. At that time it was mostly juices, smoothies…I thought, ‘I could do this.’” Regassa admits he had never trained as a chef, but had cooked for friends and family often, with recipes he recreated from his memory of seeing women in his family cook daily.

“I needed space to cook the food for the cart. I went up and down State Street asking restaurants if I could use their space. Finally the Latin Club (formerly on the corner of E. Johnson and State Street) let me use their kitchen.” The food cart was a rousing success, selling out daily. A year later, Regassa opened his first restaurant at 141 S. Butler Street, heading the line-up of restaurants that have since occupied that space – from Guantanamera to Cafe Costa Rica, to the current tenant, Layla’s Persian Food.

In 2000, he opened Buraka on State Street, the space where people came to know and love his food for 13 years. More than two years after closing that location due to The Hub development, Regassa found his current spot, in the former location of Jolly Bob’s. “There were a lot of businesses bidding to be in this space. The neighborhood voted to have us here.”

Buraka is a great fit for the neighborhood, adding to the numerous ethnic restaurants such as Ha Long Bay, Lao Laan Xang, Bandung, and Umami. The restaurant is managed by his daughter, Maron, who also seats and serves guests. Regassa himself is usually there, too. “Where else would I be?” he asks. The ample wooden bar from the State Street location was retrofitted for the current spot, and warmly greets guests upon arrival. Seating extends through the restaurant, and out onto the beautiful patio.

The menu is familiar, and the aroma seductive – Regassa mixes the spices himself, as he has for 20 plus years. They make the traditional Ethiopian fermented flatbread, injera, fresh daily, only using water, and wheat and teff flour. The lamb tibs features succulent pieces of lamb, sauteed with green peppers and onions, and pieces of injera that soak up the flavors of the spicy sauce. The cool lentil salad and sour cream subdue the heat. Most of the dishes are less spicy–dorowat is the most popular, tender chicken stew served with vegetables. “I only cook and serve what I would eat myself,” he says. Traditionally the food is eaten family style, off of one platter with the right hand only. But forks and knives are the norm at the restaurant.

The joy his restaurant and food brings people is palpable–Regassa mentions that many of his regular diners are customers from his days on Butler Street who have now settled in the Marquette neighborhood. Regassa has built his success on great food, good business sense, and a philosophy that reflects his passion: “When customers are happy, I’m happy.

Open for take-out and limited indoor and patio seating.