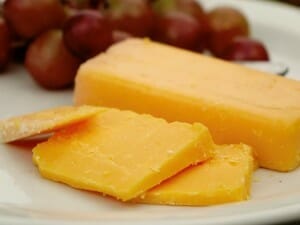 Americans are hooked on cheddar—it was the most popular type of cheese sold in the U.S. up until a few years ago. Though most producers age their cheddars only a few years, Tony and Julie Hook, the husband-and-wife team behind Hook’s Cheese Company, have displayed a penchant for mature fromage. Their two-, three- and five-year cheddars are the most popular, but it’s their fifteen-year version, released every November since 2009, that’s truly unique—they’re the only North American cheese producer to offer such a product.

Since opening Hook’s Cheese in 1976, the quality of the product has always been the top priority. “At least ninety percent of the quality of the cheese is dependent on the quality of milk,” says Tony. “We know the farmers, they know us. That is a big help. If you start with crappy milk, there’s no way you can make good cheese.”

That dedication to quality and consistency has paid off. The walls of their Mineral Point shop are lined with awards they have accumulated.

And although they’ve been in the business for years—Tony got his start at the Barneveld Cheese Company right out of high school, then both he and Julie worked with the cooperative Buck Grove before becoming the owners of Hook’s—they never expected to offer fifteen-year cheddar. “We thought we’d sell ten-year. Then we ended up with a batch of twelve-year and thought, why not? Let’s see where this goes. It just got better and better.”

Their first batch of 1,800 pounds sold out in eight days. Now the Hooks produce about 2,200–2,400 pounds of the stuff per year, enough for most distributors to offer through the holiday season.

Not everyone is sold on fifteen-year-old cheese. “Some people think that after three or five years, the cheese will be more acidic,” Tony says. “But that’s not true. Once it gets to five years and beyond it starts smoothing out. It has more flavor, but it doesn’t have that acid bite.” To enjoy it, pair it “with a good wine and some hearty bread,” Tony says. “Or eat it just by itself.”

Maybe we can learn what the Hooks already know: Aging isn’t so bad, now, is it?

Featured on TAKE OFF! With the Savvy Stews aired Nov 20. Episode available on Amazon