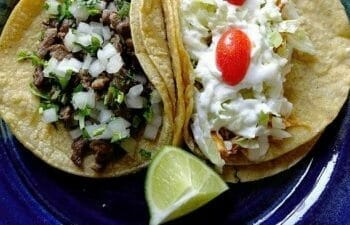 El Sabor de Puebla opened a few years ago on Willy Street, and in December of 2017 opened at 305. N. 4th Street, bringing authentic regional Mexican food to a continually impressive list of Emerson East eateries. The owner, Reyna Gonzales, hails from Puebla, Mexico, and she’s no stranger to the food scene in Madison. Gonzales has had a catering business for many years, and her tamales beckon from behind the deli counter at the Willy Street Co-op East and West.

Often, ethnic restaurants get left out of the local food sourcing conversation, but that’s decidedly not the case at El Sabor de Puebla. Gonzales’s brother, Juan, is a farmer at the Farley Center. There, he grows food for the Center’s multicultural CSA, Los Jalapenos. During the growing season, Gonzales sources the restaurant’s produce directly from Juan, ensuring the tomatoes, peppers, tomatillos and more they use are local and certified organic. Over the winter they use some of his produce that is frozen, such huitlacoche (corn smut) for quesadillas.

I stopped in on a busy Friday afternoon and managed to snag a small table by the windows. High school kids pile in at lunch, grabbing tacos, quesadillas and horchata. I waited until after the rush. At the suggestion of the chef, I ordered the chicken mole poblano, served to me by her daughter. If you are a mole lover, you will be in heaven. The thick, sweet and spicy sauce is typical of Puebla and made in-house. Peanuts, bittersweet chocolate, almonds and spices make up the sauce—bold and earthy with a dark sheen. The chicken is juicy and tender, and sides of warm corn tortillas, rice and beans complete the dish.

The bright dining room, decorated with ceramic plates and paintings, is a great place to enjoy your meal, but carry out from El Sabor de Puebla is a great option on a busy night. The tacos are mostly served in traditional Mexican manner: meat of your choice topped with cilantro, onion and green salsa on the side. The grilled steak cicena and shredded chicken tacos were both well seasoned, and a side of grilled nopales (cactus pads) was simple and fresh. The tamales are Gonzales’s specialty and are smooth with the perfect balance of filling to corn masa. Bonus: They freeze well! She offers other regional specialties as well.

* originally published in Madison Magazine, May 2015

Madison Magazine – Find the right Madison food tour for you