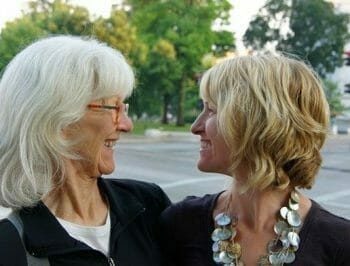 Originally printed in Madison Magazine – May 2013.

Mother’s Day is behind us. Selfishly, I believe every day should be Mother’s Day. I know I’m not a perfect mom; sometimes I send my kids to their room, I sigh deeply when confronted with yet another messy counter, and I force my kids to eat fruits and vegetables before dessert. But overall, I think I’m doing alright.

As a mother, I have fairly strong convictions about food: I want my children to eat a variety of healthy, fresh food, and I insist they learn to cook. Aside from a few points of resistance—the kids relentlessly try to eat dessert before dinner—it has been rather well-received.

I know some of my food rules, such as no drinks that contain colors and numbers in the ingredient list, I came to by way of my mom. Other rules—money spent on good cheese is money well spent—are purely my own.

I realized this Mother’s Day, that I have never actually talked to my mom about her views on food. I decided it was time.

OC: What food philosophy did you have as a mother?
MOM: I wanted you to eat healthy, nutritious food, that was as close to natural as possible, providing as much variety as possible. We did not eat a lot of meat or desserts. I tried to make healthy satisfying meals. If it could be pleasant looking, that was a nice feature.

What was important about food to you?
Eating together every day. The evening meal was a chance to gather and see each other every day, to catch up with each other. Sunday brunch was probably more important that way; it was festive, and it was an attempt to cement a family gathering.

You packed us a lunch every day for school. What were our favorite foods to take?
Ona (your sister) liked PB&J with lettuce. I put lettuce on everything! You liked fruit, sunflower seeds and raisins, pooh candy (peanut butter and honey with powdered milk, rolled in wheat germ), tuna sandwiches…

Was your food philosophy different than other parents’?
It’s hard to tell. We didn’t really talk about food, like you do today. Breakfast was critically important to me. It was so important to have breakfast. I always had fruit cut up, whole grain cereals and bread, eggs, or toaster pizza (a slice of bread with sauce and melted cheese).

What were some foods you cooked for us from your childhood?
A couple of Tyrolean dishes; schmarren [a thin pancake served with honey and grated cheese] and gris, which is toasted farina with nuts and raisins.

I remember that you cooked a lot of things from scratch that most people bought at the store, like crackers. Why did you make your own crackers and bread, etc.?
It was about time. I was home with you kids, looking for things to do. I had time, and I liked to cook. I baked bread…I made things I thought would taste good.

Did you consider yourself a good cook?
Yes, but I was not into French cooking or gourmet foods. I liked Chinese food—eggrolls and stir fry. My favorite thing to cook was one dish meals, like soup, casseroles or stir fry.

Did you know that Ona and I spent our allowance money on chocolate and candy every week? We also ate junk food at our friends’ houses.
No! I had no idea! I was overly restrictive about sweets.

I remember you and dad kept cash for groceries in an envelope. What was your food budget?
Until the late ’70s it was $40/week for a family of four. I only went shopping once a week.

Did you encourage us to cook?
I didn’t encourage you, but I let you guys cook if you wanted to. Ona wasn’t as much into cooking. And you started cooking later, in high school. We always made things like cookies together.

I remember we only got ice cream once a week on Sundays—always a half-gallon of Breyer’s Butter Pecan. There would be a little left in the carton, then by the next night it was gone. Who ate that?
Your dad!

Whisk eggs, sugar, salt, flour and milk until well-blended. Melt butter in a pan over medium or medium-low heat (a cast iron skillet is preferred). When heated, pour in batter. Fry on one side until golden brown, lifting as it cooks letting batter run under. Turn pancake over as it browns, but don’t stir like scrambled eggs. When it is almost cooked through, and golden, chop up the pancake. Serve schmarren immediately with grated cheese and a generous drizzle of honey.

Mermaid Cafe: a small cafe with a broad mission